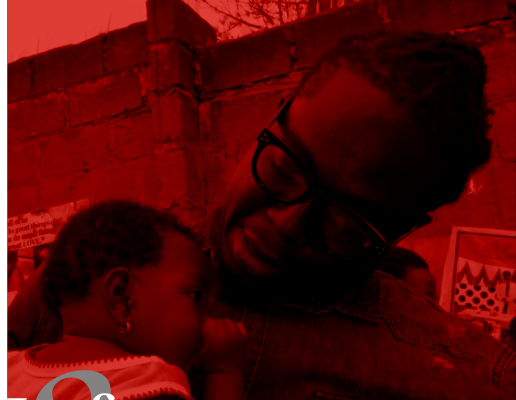 It was 2pm and there was still no call from Lafup.

I had waited two hours for his call and now I had to wait for only God knows how much longer. I had cleared out my schedule – postponed all visits to some other weekend because it is not every time that I get a chance to hang out with Segun Ogundipe, popularly known as Lafup.

Eventually, a message came through – he had simply sent an address and a time to meet. Less than an hour! I found myself flying on a bike – crisscrossing the city from Ring-Road to Bodija.

The address led me to a building encircled by and unplastered fence. I got off the bike and called to inform him I was around. A young chap in his teenage years stepped out of the black iron gate that had begun to show signs of rust and motioned to me to come inside. I did. There he was wearing his dreads woven together, his black glasses frame and the hand-bands around his wrist caught me.

In physical appearance, he was everything I had envisaged.

The compound was filled with children of different ages. They were seated in white plastic chairs and they had a couple of adults sitting directly opposite them. At the time, two things were on my mind – “where is this place?” and “why am I meeting Lafup here?” To be honest, I had expected to meet him in some palatial mansion or an exclusive lounge or something but there was in this simple compound with kids who were wearied from waiting for him but hoping that he’d come on.

Lafup pulled a chair, I pulled another and we began to talk. He began to fill the gaps for me. He told me he had come to Ibadan just for the kids to talk to them and have some fun with them. It was then that I realized that it was an orphanage. That, I hadn’t expected.

Lafup tells a story of how his uncle took him to school and told him to turn the school upside down. “My uncle took me to the two secondary schools I attended and at eeach point, he said the same thing – I never got it. When I got into the University of Ibadan, nobody took me to school – I went to school by myself. It was then that I understood what he meant when he said I should turn the school upside down. He was simply saying anywhere you find yourself, make so much impact so much that people will miss you when you are gone. It took me almost ten years to understand what my uncle meant. And guess what, I turned UI upside down for good using my brain…by doing comedy.”

The message to the kids was a familiar one.

You Only Live Once so, live right. Dare to dream big but don’t be afraid to start small. Leave your mark in a place, and he didn’t mean those scribbles on the wall like many of us did in Secondary School. Things like: “Labzy wuz here”. Shake up the place – create positive ripples.

“Find someone who is ahead of you in whatever you choose to do. Understudy them,” Lafup says when one of the kids asks him what his advice will be for anyone who wants to be a comedian. He then goes on to tell the story of his relationship with Alibaba and how that relationship has impacted his career.

“I worked for Alibaba for 4 years and I was not paid a dime. He only gave me whatever he chose and whenever he chose. For me, I was learning the ropes of the art and business of comedy. I wasn’t in a rush for the money. When you have a mentor who has your interest at heart, stick with them. They may not pay you a dime but as you learn, they will provide you with big, credible platforms on which you will showcase those things you’ve learned from them. In the end, they will also be the ones who will get you gigs and opportunities that will pay you huge.”

Lafup shared a slice of his ‘I knew I was always funny but I did not have the platform from the start to make people laugh but still I persisted. Every man has a time and everyone’s time will come. It make take some time but it will come. My first major gig came when I was in UI, 2006. There was an MTN concert and they needed comedy acts for the show and I shared the stage with P-Square, and other big names. Everything I had done prepared me for that big MTN event and as providence would have it, I made N7,500 which I then put back into the second edition of my own personal show on campus.’

The highlight of the visit had to be when Lafup asked the kids if they knew Alibaba. Half of the kids said no, another two-thirds were silent. The other one third said they know Alibaba. Excited, one of the kids who claimed to know Alibaba delightfully chimed: “Alibaba and the 40 thieves!”